PRETORIA, South Africa – The ANC women’s league in KZN and the party’s youth league in the Western Cape are outraged over a Facebook user who likened Cogta minister, Dr Nkosazana Dlamini Zuma to an ape.

The women’s league wants the man who is believed to be from the Western Cape and who goes by the name of Daniel Herselman on Facebook to be prosecuted for his racist post.

This is while the youth league in the Western Cape said it will on Monday approach the Cape Town Equality Court to lay charges against Herselman.

In a statement issued on Sunday, the women’s league provincial secretary, Nonhlanhla Gabela, said that the attacks on Dlamini-Zuma stem from her hardline stance in the ban of tobacco products in the country. She stressed that as women they stand firm on the tobacco ban and reaffirms their support for this stance due to the detrimental effects of cigarette products on the health of smokers and non-smokers alike.

“As the ANCWL KZN, we see this racism attack on Dr Nkosazana Dlamini-Zuma as an attack on our hard-earned democracy and women in particular. This racist has grossly undermined the human rights of Dlamini Zuma. We urge the police to arrest him so that he can pay the highest price by facing the might law of our country. We cannot allow a situation where White supremacy apologists continue to attack Black people wantonly. As the WL we want the strongest sanction to be meted out! It is not sufficient for the accused to get a slap on the wrist fine, racism must be seen as the serious crime it is,” Gabela said. 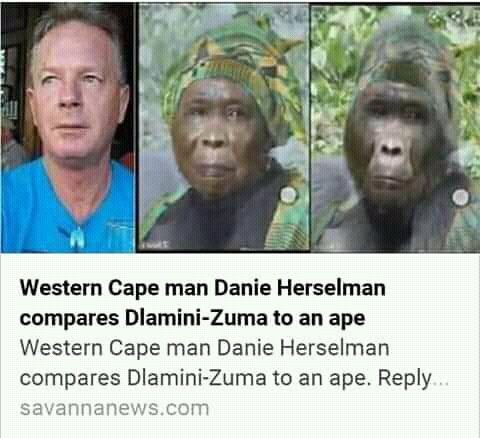 In its statement, the youth league said for years, if not centuries, the black majority have had to suffer the indignity, humiliation, and attempted dehumanization by being referred to as baboons by sections of white society.

“In the past few years, we have seen racists in the white community boldly stepping out and give vent to their poisonous and hate-filled views. The attack on our mother, Dr Zuma is a vicious attack on our national policy of reconciliation and nation-building. It is also an assault on the dignity of black women. We will not allow Herselman to get away with it.

“On Monday we will lay a charge against him at the Equality Court in Cape Town. We hope that this court will treat our complaint as an urgent one because these racist views are not only a wanton abuse of freedom of expression but can also stir up racial tensions. We are firm in our belief that these kinds of attacks on black people will continue as long as those who were economically privileged and advantaged by apartheid are still in control of the economy. Some believe that their economic muscle gives them the power to defile our country with their racist views,” the youth league said.

Dlamini-Zuma’s spokesperson, Lungi Mtshali, did not respond when asked whether or not the minister will personally pursue this matter.

Jones’ tweet showed the image shared by one “Danie Herselman”.

News24 reached out to a man who identified himself as Herselman but was using a different name on Facebook. He said he wanted to consult with his lawyers before commenting.

In response to the post, ANC deputy secretary-general Jessie Duarte called Herselman a “racist with absolutely no respect for human beings or human life”.

“[He] equates human beings with monkeys and apes and believes that he is perfectly in his rights to do so. A man who, I’m sure, has no religion, no humanity and who absolutely should not belong to a South Africa that is striving to be non-racial, non-sexist, united and democratic.”

She added it was “because we fought for a democracy that [he is] able to be as ridiculously racists as you are”.

Twitter users also posted their outrage, with some saying a case needed to be opened against those posting racist content on social media.

Thipanyane said investigations of this nature could take up to a month, although that could be longer if the case was escalated to the Equality Court.